Blog - Latest News
You are here: Home / Blog / An Afternoon in the Santa Cruz Prison

Our tour bus lurched and bumped its way around a final turn in the pock-marked Santa Cruz road before it stopped close to the tall, barb-wire crested walls of the Bolivian State Prison: Centro de Rehabilitacion Santa Cruz “Palmasola”.  The Santa Cruz Jail is really a walled town where the inmates build their own homes and eke out a living within its four guarded walls.  Prisoners are allowed to have their spouses and children stay with them at different points though the week – a healthy strategy in rehabilitation and restoration. This was another first for our break-off group of 20 who were scheduled to distribute bibles and witness to the prisoners – an incredible opportunity – really a miracle clearly orchestrated by God! The main jail chaplain (a former prisoner who has dedicated himself to reaching out to the inmates) prompted by the Lord, decided to describe our Canadian group visit as a “violin concert” for the inmates on the application forms he submitted.  He shared with us that in the history of the jail, there had never been an event like this for the inmates. He feels that God gave him the words to use on the forms to open the door for us to be there! A corner guard tower on the front wall

The Santa Cruz Jail is like nothing I have ever experienced. We were instructed to leave all jewelry, including my wedding ring, at our hotel. All cameras were to be left behind as well. I kept mine with me to try to snap a photo or two of the outside of the institution from our bus as we drove by and parked close by. We could only bring those items into the jail that had been pre-approved on the application/clearance forms: my electric violin, MacBook Pro (to drive our loops/tracks) and related gear were the only items on the list … so my acoustic violin (and camera) stayed on our bus. All interior photos you see in this post were taken by a guard who is the official jail photographer. He graciously (and secretly) gave us copies of the photos he took from our visit.  Tony Lind (guitarist) brought his electric guitar and pedals (no amp on the list, so he was fortunate enough to be given the loan of an amp modeler pedal at the last minute) which fit as “gear”. 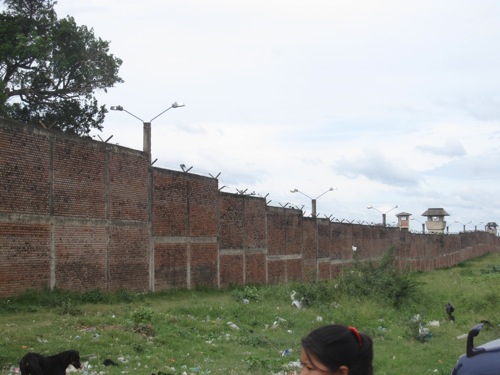 The tall barb-wired walls of the prison village

Our group of 20, passports in hand, formed a long single file line in from the the main entrance – I was second in line the “famous Canadian violinist” with his “entourage” as the clearance forms read! A huge iron front entrance gate rolled open revealing the prison village. A stern security guard stamped and hand wrote a number on our right forearms. Each member of the group carried a box of bibles. It was quite a sight to look back from my vantage point at our team winding behind bringing the “Word of Life” into this dark place (800 copies in total)! We wound through an open area where Horses grazed in and around an garbage dump (everything is self contained in this jail)  to a second security point where our arms were again stamped and numbered. The guards at this check point were curious about our bibles. I opened up a box and pulled out a bible to show the guard. He wanted it. Instantly, all the other guards at the check-point asked for one – six more bibles were grabbed. An interpreter told me to stop … that we needed to move on. We were now entering the actual prison village where all the inmates lived. A large group of men, hardened lives engraved in faces and eyes parted to let us through – I locked eyes with a man whose left eyelids were eaten away by some weird tropical disease (a horrible sight) …  a man with a wheelbarrow excitedly motioned and asked in Spanish to help carry some boxes of bibles but our interpreter/guide told us to ignore him and move on … that this could cause a riot from others wanting to help too (I felt badly for this man who was simply wanting to help and reach out to us) … Sewage ran out of buildings and houses into ditches on each side of the road …  Men, women and children curiously peered out of doorways and balconies as our procession snaked toward the central square of the institutionalized village. Joy was absent from this place. Fear and suspicion ruled. Our forearms were stamped with level one and two clearance stamps and numbers. I am number two in line, Tony is number three.

We finally arrived at a covered concrete stage at one end of the square where a make-shift sound-system had been set up. I paused for a moment to take it all in from my new vantage point. Inmates began to gather around as Tony Lind and I set up and sound-checked. Our group from Canada were introduced and our concert set began. I have played on concert stages around the world, but this was like no stage I had ever been on before! As we performed a group of inmates in full soccer uniform were playing a spirited game in the distance – the players seemed to move like ballet dancers to the beat of our music. Our prisoner audience grew as our set progressed. It was incredible to see the changes in the countenance of each inmate as we performed. Joy, trust and peace began to return. God was using our music to soften hearts and minds and prepare them for the gospel message. The 6th song on our set was “El Cóndor Pasa” (the Condor flies past) – a well known South American folk song made popular by Simon and Garfunkel. Spontaneous cheers rang out from the convicts as we began … tears began to flow … we had connected … we were now one of them. This song symbolized freedom … as we played I couldn’t help but reflect on the following words from Isaiah 40: 29-31:

He gives strength to the weary and increases the power of the weak.
Even youths grow tired and weary, and young men stumble and fall;
but those who hope in the LORD will renew their strength.
They will soar on wings like eagles; they will run and not grow weary,
they will walk and not be faint.

Next, I shared my story via my interpreter, Jorge Soria from Peru. The themes of hope and God’s healing and grace in the middle of pain, loss and hardship really resonated with the inmates. They spontaneously broke out into cheers and applause (another first for me) at different points as I spoke of God being my “daddy” and the “healing I have received from abuse”  …  We closed our set with “Iyale” – a tie-in song to my story which is a celebrative West African styled song I have dedicated to my dad, Dr. Kenneth Dick, prefaced with these words: “Although I have missed my dad all these years, I have the hope that one day I will see him in heaven” … Tony and I start our concert set Following our set, Peter Marshall, Executive Director of Gideons Canada, gave a powerful five minute gospel message. During the altar call, most of the inmates (an estimated 600) put up their hands and prayed to receive Jesus into their lives. All 800 bibles were distributed as Tony and I performed “Passion”. We then ended our prison concert with a celebrative “Blues Jam” and “Yahweh”. Many inmates raise their hands and pray to receive Christ Eight hundred bibles were given out as gifts to inmates

As I look back on our afternoon in the Santa Cruz Prison, I am in awe of the power of instrumental music (dedicated to God) to calm the spirit and restore the soul. I am reminded of the story of David (1 Samuel 16) and how God used his music on the harp to calm the troubled spirit of King Saul. This is what the ministry of Flyingbow is all about. I left that place knowing I had been in the center of God’s will … with real confirmation that I was doing His restorative work as a music missionary in partnership with Gideons Canada.

Congratulations to George Seara for his Juno win :: Recording Engineer of the... Two Amazing Visits to the Santa Cruz, Bolivia Navy and Air Force Bases
Scroll to top